The Case for Fathom

As a business owner, you have lots of data but little time to sort through it. This is a costly problem because data is only useful when it’s organized and consolidated. Organized and consolidated data turns into valuable information. This information can provide insight into your company’s operations, allowing you to see areas of profit and loss and respond in a timely and strategic manner. But how can you take your company’s data and turn it into useful information quickly? That’s where we’d like to make a case for Fathom.

There are many softwares that can crunch numbers and slice and dice data but crunching numbers does you no good if you can’t present it or understand it.

Fathom offers a refreshing take on the commonly outdated and complex business finance management tools with lack-luster visuals. Instead, Fathom’s software welcomes users of all skill levels, offering an easy-to-use interface with interactive and state-of-the-art visuals that make you want to dive deeper into your company’s financials.

Rather than reviewing a 20-page narrative on your business, Fathom offers visuals that tell your company’s story in a concise and compelling way. Your successes and pain points are easily recognizable so you can respond quickly and effectively to capitalize on areas of profit and remedy areas of concern. 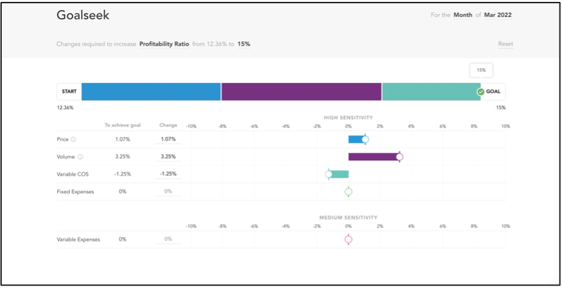 Your company isn’t stagnant, and your data shouldn’t be either. Not only are Fathom’s charts and graphs appealing from a visual standpoint, they’re also interactive so you can theorize and brainstorm in real-time to determine the steps needed to get your organization to the next level.

For example, let’s say you want either your gross profit margin or revenue to be a certain percentage. But what triggers do you need to pull to get there? This is where comparing Excel and Fathom becomes apples and oranges. In Excel, you can do it with numbers, but you would first have to build the visuals and make the visual interact with the numbers you’re crunching. With Fathom, you don’t have to do any of that. With their goalseek feature, you can do it instantaneously with your data and numbers. The built-in module allows you to type in your percentage goal for either profit margin or revenue, and it will show you how much you must change your revenue, your cost of sales and expenses by to achieve that goal just by switching the visuals around. It doesn’t get much easier than that.

This feature is one of our favorites within Fathom. Microforecasting enables businesses to look at an isolated event of business decisions within your business and its financial impacts.

For example, maybe you’re wondering if now is a good time to hire a new salesperson? Fathom can show you the impact of making that decision now or maybe pushing it out two more months. With its interactive capabilities, you can easily toggle between your options to make the best overall decision.

Without Fathom, you would have to pull data out of one of these three programs, place that data into excel, compile the data, move things around, readjust, and then upload that data into a data visualization software to finally get usable and visual information. The work is more exhausting than the run on sentence we just used to explain it. Fathom makes things simple by pulling the data from any of these programs automatically each night or can provide an update instantaneously with just the click of a button.

What makes this even better is that automation means less room for manual error, which means you can trust your numbers are correct.

Software not integrated with Fathom? There’s a solution built in for that too. Instead of slicing and dicing data to create your own template, you would just put the data into Fathom’s custom-built template and upload directly into the software.

Via our own experience, we feel certain you’ll spend fifty percent less time doing this work by utilizing Fathom’s technology, and who couldn’t benefit from some extra time in their day?

We just can’t recommend this software enough. Give yourself back the time you need and invest in Fathom to provide your company with an accounting software that is automated, insightful, and actionable. Automation and integration are the smart ways to run your business, and Fathom can help you do it with ease!